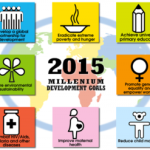 The cost of funding the Post-2015 Development Agenda is estimated to be trillions of dollars a year.1 Whilethis magnitude may ...

Women’s Health and the MDGs

These briefing cards outline why decision-makers should prioritise saving mothers’ and newborns’ lives and key investments they should make in ...

Neonatal cause-of-death estimates for the early and late neonatal periods for 194 countries: 2000–2013

Objective To estimate cause-of-death distributions in the early (0–6 days of age) and late (7–27 days of age) neonatal periods, ...

Official Report of the EuroNGOs 2014 Conference

This report is a summary of the discussions held at the 2014 EuroNGOs Conference based on audio recording and -where ...

A new report finds a staggering lack of basic sexual and reproductive health services in developing countries. The report, Adding It ...

This global review, led by the World Health Organization, Aga Khan University, and the Partnership for Maternal, Newborn & Child ...

This World Health Organization resource is a package of guidelines and tools which respond to key areas of maternal and ...

Sexual and reproductive health and rights post 2015—challenges and opportunities