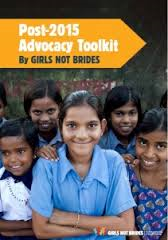 As the post-2015 process moves into intergovernmental negotiations, this toolkit by Girls Not Brides aims to assist activists in their efforts to urge governments to support and speak out in favour of a target to end child, early and forced marriage.

There is growing momentum to end child marriage, with resolutions in the UN General Assembly and Human Rights Council, regional action plans to end child marriage in Africa and South Asia and numerous countries developing national action plans. However, we need to make sure that these commitments and plans translate into real action, as we know that lasting change will happen on the ground.

We have the opportunity to ensure that ending child, early and forced marriage is a part of the post-2015 development framework, which will replace the Millennium Development Goals and define global development priorities for the next 15 years. A target to end child, early and forced marriage in the next set of goals will maintain long-term focus on the issue while guiding resources and funding to the ground, bringing about real change in the lives of girls, their communities and countries.

Read the toolkit in full (PDF)