Launch of Saving Lives, Protecting Futures: An Every Woman Every Child Progress Report 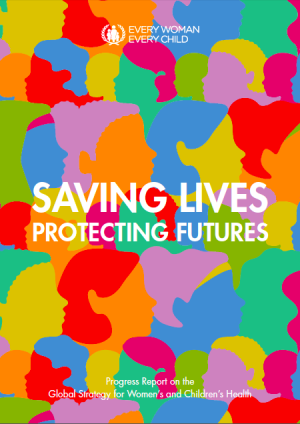 Almost five years since the strategy and subsequent Every Woman Every Child movement launched, this report provided the Secretary-General with an opportunity to report back to Member States and other stakeholders on the progress made and lessons learned under the Global Strategy. The report also sets the rationale for continued and accelerated action on the unfinished MDG agenda.

The Secretary-General, throughout his opening remarks, spoke of his personal commitment to Every Woman Every Child, stating “you have heard me in the past [speak] about my own experiences as a child, losing one of my brothers and sisters…that is why the health of women and children is a personal cause to me.” He went on to highlight that since 2010 alone, the world has saved the lives of some 2.4 million women and children thanks to the interventions outlined in the Global Strategy for Women’s and Children’s Health.

Following his remarks, Emelin a youth representative from Guatemala along with fellow youths presented the Secretary-General with Saving Lives,

Protecting Futures: A Progress Report on the Global Strategy for Women’s and Children’s Health, marking the official launch. The launch was followed by Emelin’s remarks highlighting the importance of listening to the voices of youth on issues that directly impact them.

In her opening remarks, Ms. Melinda Gates’ stressed the importance of sexual and reproductive health. If women can plan their families, they can space their pregnancies and are more likely to have healthy babies. Gates also noted the economic value in investing in women and girls, for when women invest, they invest in their communities, they invest in their families and as a result societies thrive.

The opening remarks were followed by a lively panel conversation featuring: the Secretary-General, Hon. Julia Duncan-Cassell – Minister of Gender and Development, Republic of Liberia, Mr. Kenneth Frazier – Chairman and CEO of Merck, Dr. Ariel Pablos-Mendez – Assistant Administrator for Global Health and Child and Maternal Survival Coordinator at USAID, Dr. Babatunde Osotimehin – Executive Director of UNFPA and Ms. Vera Brezhneva – UNAIDS Goodwill Ambassador for Eastern Europe and Central Asia. Throughout the panel speakers highlighted partnerships, accountability and transparency as the pillars to Every Woman Every Child’s success. Additionally participants noted that Every Woman Every Child has deepend our collective resolve to end preventable maternal and child deaths and ensure their well-being.

The Honorable Anthony Lake, the Executive Director of UNICEF, provided closing remarks for the event, in which he highlighted the three themes that had emerged throughout the discussion- the progress made in advancing the health of women and children, the role of partnerships, and the renewed commitments and promises leaders had made throughout the event.

Stakeholders left with an intensified need to work together to ensure that the health of women and children remains at the top of the political agenda as we head into the post-2015 development era.