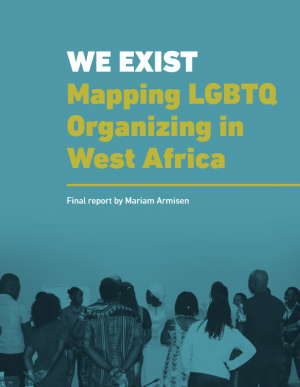 A new report maps the growth of LGBTQ organizing in West Africa, highlighting challenges and opportunities.

The research provides an overview of LGBTQ organizing in a large and diverse region, drawing upon a wide range of perspectives and experiences of local activists and organizations. Though funding for LGBTQ activism in West Africa has historically focused on gay men and other men who have sex with men (MSM), the scan shows that more broad-based LGBTQ organizations are emerging. Several of these nascent groups are led by queer-identified women and gender non-conforming people.

Commissioned by a group of funders and activists, We Exist: Mapping LGBTQ Organizing in West Africa, is part of an exploratory and participatory process to shape the creation of a new, LGBTQ activist-led fund in West Africa. The research engaged a total of 50 groups and 180 activists from nine countries: Benin, Burkina Faso, Cote d’Ivoire, Ghana, Liberia, Mali, Nigeria, Senegal, and Togo.

The scan is unique in bringing together viewpoints from Francophone and Anglophone countries and capturing the differences and commonalities for LGBTQ organizing among them. It outlines the supportive roles that local technical assistance providers and international organizations have been playing. The research also sheds light on the achievements of a growing movement that has received relatively little attention to date.

The report concludes with stakeholders’ recommendations for the priorities and management of a fund led by West African LGBTQ activists.