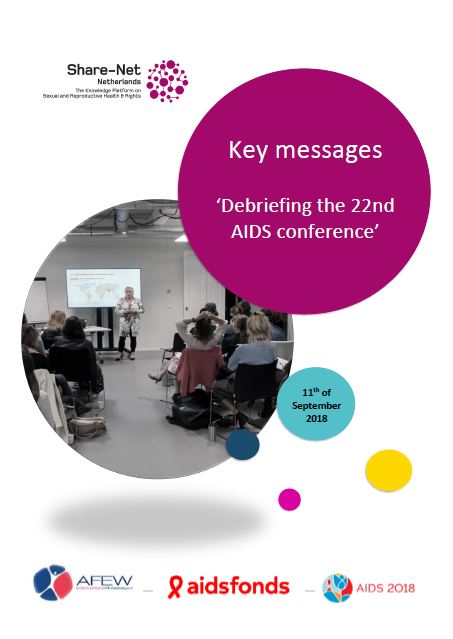 Share-Net Netherlands, AFEW International and Aidsfonds organised this debriefing for members and beyond to reflect on three key topics: 1.) Eastern Europe and Central Asia region; 2) Cures and Treatment and 3.) Funding. Furthermore, there was the opportunity to share experiences, highlights and discuss ways to move forward. The meeting was chaired by Monique Middelhoff, Senior Advisor SRHR and AIDS, Ministry of Foreign Affairs.

AIDS 2018 emphasised the large increase of new HIV cases and challenges to prevent and treat HIV and  TB-HIV in Eastern Europe and Central-Asia. AFEW summarised the sessions and discussions that addressed the way forward at political and civil society level to stop new infections. An important part of the discussions dealt with the discrimination of the key populations at risk for HIV and TB.

AIDS 2018 presented the importance and the state of the art of new medicines and the pipeline; drug regimens with less side-effects; new methods to improve adherence to treatment and new data about PrEP. The hopeful developments of an HIV vaccine were shared. At this meeting the scientific background for an improved treatment and cure to optimise the quality of life of people living with HIV and prevent HIV was shared.

One of the key messages at AIDS2018 was “we are not on track”. This was also covered as a main message in the media. The target of 90-90-90 was set, but we are nowhere near where we should be. For years we used a positive messages about ending AIDS, which brought a certain complacency. That proved to be quite dangerous.

Several donor countries are decreasing their funding to the AIDS response, while at the same time the number of new infections are not declining and even on the rise in 49 countries. Also, co-infections are really important to take into account.

The latest data on the developments in the funding landscape that were presented at AIDS2018 were shared. Key issue remains how to close the funding gap of 6 billion, with a focus on political will and the need to keep investing in community-based and –led responses. The issue is that we are really dependent on the USA.

The good news is, that there is a slight rise in domestic funding. However, key populations are usually not included in programmes financed by the domestic funding, so international funding remains important.

Another important fact is that AIDS money did not take away money from other health issues. Over the years, all the funding has gone up.

Sex work and the location of AIDS 2020

Suggested was that Share-Net can facilitate setting up a Community of Practice (CoP) concerning key populations. It was added that this would be valuable since Share-Net is a large network of organisations in the Netherlands. AFEW, Mainline, RNW and GNP+ will contact the secretariat of SN-NL to kick start the CoP.

This topic was pretty much visible at the conference. The integration of HIV/TB, together with viral hepatitis was discussed. Also, the integration with other health related issues needs attention. When someone comes for measurement for his blood pressure e.g., the service provider can also offer to do an HIV test, or screen for TB. Mostly women come to health services. Important lesson remains that you need to get the men on board to make it work. A big, 2 billion project, a.o. funded by Elton John AIDS Foundation, MSTART project, will be implemented in Sub Sahara Africa to ensure that men come to health services.

Concerns were voiced about the need to continuously build new leadership. We have to try to keep the young people who were involved in this conference on board. The advantage is that young people live in a world with other young people. They are in touch. We need new leadership with experience.

GNP+: We helped connecting young people from the EECA region to young people from all over the world. That was a great success. They could learn from each other and saw that they are dealing with the same problems.

Monique: To not lose the momentum, you need to always go on. EECA will still be important. DGIS will remain in touch with its embassy in Russia. Although the new government has new focus countries and regions.

Anke: AFEW is currently developing a strategy for its work in Russia. There was and EECA working group for the preparation for the EECA involvement at AIDS2018. It would be great if AFEW can receive input from members of Share-Net for its Russia strategy development and further on. AFEW will take the lead in this.

There is a tendency that the aspect of ‘rights’ is added more and more in addition to a health approach at conventions. This is a positive development. Organisations which focus on health, do not necessarily focus on rights. If this is more connected, issues like criminalization can be addressed. It was mentioned that this could be certainly a focus of Share-Net for the next year.

KIT: We need to also address the topic of refugees. Monique confirms: these populations need to be certainly addressed as well as internally displaced people and migrants.