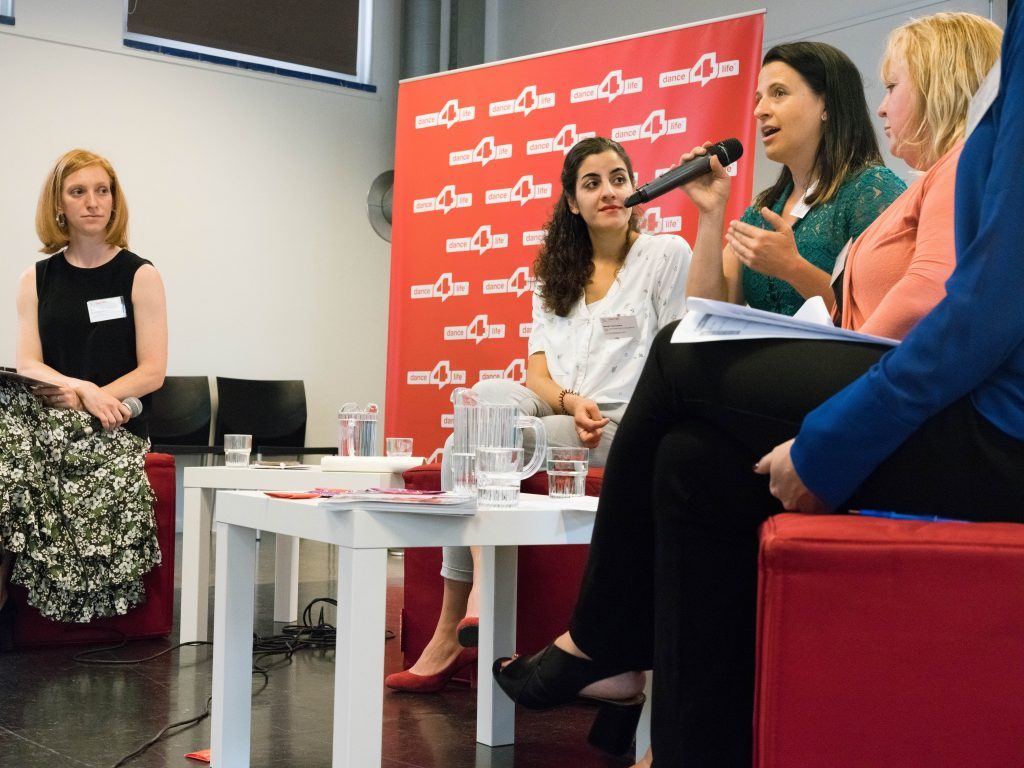 On June 14th, 2018, Share-Net International Dance4Life and offered a unique morning of informing, experiencing and discussing how to implement the newly published, updated version of the International Technical Guidance on Sexuality Education (ITGSE) and foster its use at national level. Aims of the event were to increase knowledge about the ITGSE and its uses, as well as to foster collaboration between governmental and non-governmental sectors to ensure high quality Comprehensive Sexuality Education (CSE).

ITGSE as a result of broad collaboration

Building on this, Marina Plesons offered a way for the audience to argue on behalf of the new ITGSE, by approaching it from the angle of the health impact of gender inequality. Marina stated that the health risks for children of the ages 5 to 9 years are similar for both boys and girls, but that health risks become increasingly gender defined as a child enters puberty. Research shows that in puberty pre-exissing gender atitudes are established, so the urgency of having gender equality as one of the key concepts in CSE is clear. The panel also discussed the implementation of the new ITGSE. A challenge according to Melodi, is that young people do not see teachers as a credible source of information on gender and sexuality, which means that we need to organize other sources to ensure the necessary knowledge level and create safe spaces for talking about these issues. Melodi: “Make sure that everything which is in the guidance also reaches young people, especially young brides and mothers who don’t go to school. They need access to this info!” Karen raised the question on how we could engage teachers to ‘cope’ with this challenge, to talk about CSE and bring social-emotional-learning (SEL) into practice.

Experience CSE on the ground

After this very informative knowledge session, each of the participants could choose two out of three interactive sessions delivered by three Dutch NGO’s working on CSE. There was the ‘Healthy Sexuality is as Easy (or Complicated!) as Eating Healthy’ by Annemarie Schaapman, Interna􀆟onal Technical Advisor at Rutgers and Maeva Bonjour, Senior International Technical Advisor. In this workshop participants were requested to label certain questions (around healthy food and around sexuality) as ‘learner centered’ or ‘teacher centered’ and we discussed the two approaches in  elaboration to CSE implementation. Lindsay van Clief, Content Strategist at RNW, facilitated the session “CSE online: supporting key messages in digital spaces” during which the participants made exercises focused on short and sticky messaging to get young people interested and engaged in thinking about their sexual lives and choices.

The third experience was facilitated by Nina Pavlovska, Innovation, Development and Training Manager at Dance4Life and Jorik van Enck, Research & Development Manager. In their workshop “Idecide4myself” the participants could experience an activity of the Journey4Life (the Dance4Life empowerment curriculum) in which participants explored their personal boundaries to understand how they influence their relationships with others and their potential sexual partners.

We wrapped up the event with the think tank plenary discussion, facilitated by Esther Miedema, researcher and lecturer at the Amsterdam Ins􀆟tute for Social Science Research at the University of Amsterdam. The two main discussion topics raised were:

1) the collaboration between NGOs and governments in fostering quality CSE, and
2) what the challenges are in implementing quality CSE.

Related to the first: we talked about the fact that the current guidelines are more focused on governments than on other stakeholders. With this in mind, we need to stay very aware of the fact that wording and terminology can cause ‘language resistance’ among different target audiences of the guidance. Bringing the guidelines to life is not only a point of contextualising – which is important – but also absolutely depends on who the teacher or trainer is delivering the curricula and what their preconceived ideas are on CSE. Additionally, the remark was made that we should not only focus on the role of teachers, but also acknowledge the crucial role of young people talking about sex with their peers. Research shows that peer educa􀆟on works well, since peers know young people’s reality around sexual issues.

Clearly there are still certain criticisms of the ITGSE and many challenges for its implementation. The ongoing discussion following the ITGSE’s publication focuses on the importance of contextualization: however, whose context are we looking at? Should we focus on religious leaders, parents, teachers or only young leaders? We concluded that at least the learner centered approach, which is also promoted by UNESCO, is an important way to go. We see there is already a great diversity of approaches to CSE implementation, clear too during the workshops sharing online youth-to-youth, peer education and teacher focused approaches. And as UNESCO has now launched the ITGSE, it is our task to make the contextualisations, champion these at the ground and government level and keep the discussion going!