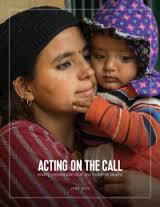 Last year, USAID unveiled a roadmap outlining how it plans to support 24 high-priority countries to make sure that children live to celebrate their fifth birthdays and that their mothers live to see them grow. USAID has just released a new report with an update on progress made and an additional focus on the interventions needed to save women and mothers. The 2015 Acting on the Call: ending preventable child and maternal deaths report reveals that USAID’s maternal and child survival efforts have resulted in nearly 2.5 million more children surviving and 200,000 maternal deaths averted since 2008 in USAID’s 24 priority countries. In addition, the USAID report details how to reach 38 million of the most vulnerable women around the world with increased access to health care during delivery by 2020.

The report release coincides with a Call to Action Summit  for ending preventable child and maternal deaths in New Delhi hosted by the Governments of India and Ethiopia, USAID, the United Nations Children’s Fund, The Bill & Melinda Gates Foundation, Tata Trusts, and the World Health Organization in New Delhi.

For the first time, with new technology and partners, a sharper focus, and a global commitment to hold ourselves accountable, we can bring an end to preventable child and maternal deaths in a generation.