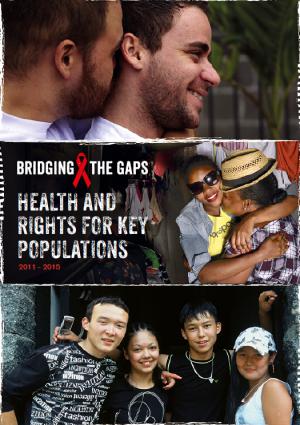 At its inception in 2011, Bridging the Gaps was one of the first programmes of this scale to focus on investing in the health and rights of key populations. Now four years later, a strong alliance that interlinks three key populations: sex workers, people who use drugs, and lesbian, gay, bisexual and transgender people has been forged. In this concluding publication, a selection of activities and achievements of the first phase of Bridging the Gaps (2011-2015) is presented.

The programme has reached more than one million people with services in 16 countries. In addition, Bridging the Gaps has contributed to the adoption of global guidance that promotes the human rights of key populations and changes in harmful laws. The work of Bridging the Gaps has shown that rights-based approaches and services geared towards the needs of these key populations result in health improvements and increased fulfilment of human rights.

“Bridging the Gaps has transformed the lives of sex workers and their environment in Uganda. It has bridged the gap between sex workers and law enforcers, brothel owners, local leaders, policy makers and the general community, and has received the promise of high level commitment from these people.”