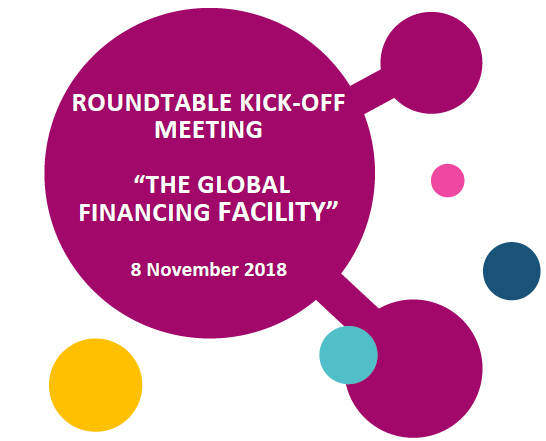 On 8 November 2018, Share-Net International organised the roundtable kick-off meeting about the Global Financing Facility (GFF) hosted by Cordaid in The Hague. The objectives of this meeting were (1) to provide more in-depth insights into the GFF mechanism and its implementation; (2) to reflect on key results of GFF and country examples; (3) to create a space for reflections around GFF; and (4) to discuss opportunities for the way forward. This document contains the full report on the roundtable presentations and discussion.

During the UN General Assembly in September 2018, the Netherlands announced its investment of 58.8 million EUR (for 5 years) in the GFF. Through this investment, the Netherlands will be part of GFF’s highest decision-making body, the Trust Fund Committee. The Netherlands also joins the Investors Group, where GFF partners discuss country level progress and how to strengthen collaboration across the partnership.

The Netherlands’ decision to invest in GFF is based on the following reasons:

The GFF was launched in July 2015 in response to two trends:

Since 2015, the GFF has been active in 16 countries, with 11 new countries joining in  September 2018. Ten of the GFF countries are fragile states. The GFF’s work is not only driven by country demand, it is also driven by the highest needs in countries with the highest mortality burdens. 67 low and low-middle income countries are eligible for GFF funding, and to date 50 countries have expressed interest in joining the GFF. The GFF was created to be a country-led catalyst for health and nutrition. Its ultimate objectives are closely linked to the SDG targets. Country ownership and leadership are at the core of the GFF approach. GFF is government-led and builds on existing platforms in which CSOs and private sector are represented. In countries where such platforms do not exist, the GFF facilitates their establishment.

How does the GFF work?

On the programmatic side, GFF works with countries to identify evidence-based priority investments to improve RMNCAH outcomes, which is done through “Investment Cases”.  On the financing side, a longer-term perspective is used to work with countries to identify key reforms to make financing systems more sustainable, equitable, and efficient. The GFF process is as follows:

A set of core indicators is currently finalised for use in GFF countries. It builds on processes for the SDG indicators and the “Every Woman Every Child” movement. It includes indicators for monitoring and tracking at multiple levels–progressing from inputs/process, to outputs, outcomes, and for evaluation of impacts.

The GFF Replenishment Event (Oslo, 5-6 November 2018) saw much engagement from CSOs regarding their role in the country platforms and towards the accountability agenda, and challenges in capacities of local CSOs. Two CSO representatives have a seat in the Investors Group. According to the recent article published in BMJ Global Health[1], full GFF replenishment (thus closing the financing gap) would result in up to 35 million prevented deaths of women, children and adolescents by 2030.

The Netherlands could be supported by providing as much information and evidence from the field as possible: about GFF’s implementation, real investments in SRHR, and gaps identified which are needed to improve health. Regular meetings with the Dutch civil society could contribute to this. The Netherlands has a strategy with respect to GFF at global level but we need to be realistic about the level of influence: determined but modest. The Dutch with like-minded donors could have a strong influential role. In addition, the importance of influence at national level was emphasized.

Presentation: The Case of DRC

Presentation: The Case of Mozambique

Started in 2015, building on an existing country platform. The Investment Case is aligned with DRC’s national health strategy plan, which had a huge funding gap. The MoH defined RMNCH packages as the main focus. The Investment Case currently targets 49% of the total population, focusing on the regions lagging behind in maternal and child mortality, and poverty rates. However, with all resources combined we still experience gaps; thus, when donors or investors enter the country, they are requested to focus on specific thematic areas (such as nutrition) and in specific regions. GFF has observed improvements over the last year (2017) and continues to scale up.

The GFF country platform was built on an existing and well-functioning coordinating mechanism. However, the national health strategic plan was too broad which resulted in limited implementation. The Investment Case describes the priorities, including reforms of the health sector (not only RMNCH packages). On the demand side, the focus is on behaviour change. On the supply side, the focus is on community-based interventions, readiness of type A health centres, and obstetrical care in district hospitals. Priorities are adolescent health and nutrition.

The majority of the Investment Case is financed by the government. The partners provide support in different ways; GFF collaborates with all different partners, including UNFPA and others to support them on sensitive issues such as safe abortion. USAID – in spite of serious budget cuts on SRHR – has continued to fund many different programs. Remarkably, they also invested money into the multi-donor investment case. The Netherlands also played an important role in Mozambique.

The CSO hub is established to strengthen linkages and information exchange at country level. It will be helpful to know how to identify your CSO advocate in the GFF country platform. It is our role as Dutch CSOs to build capacity of our local CSO partners on GFF, and to take up their role as advocates with GFF and with the Netherlands embassies. It will be useful to share our experiences on how capacity building is or can be done (for example through E-learning).

As the Netherlands currently has a seat in the Trust Fund Committee, it is useful to organise meetings with Dutch CSOs to share insights on a regular basis. The evidence from the countries is important. GFF is new and sometimes involves system restructuring. Evidence cannot be collected that quickly, but monitoring is needed.

Community of Practice in the Netherlands

Share-Net can continue to facilitate the community of practice among CSOs in the NL on GFF which can remain active over time, and bring in evidence (for example through small grants).