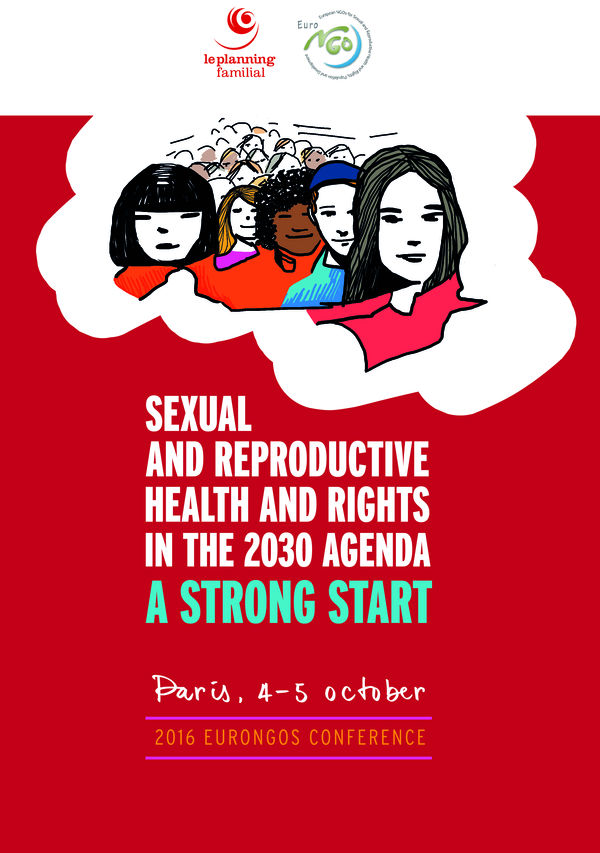 The EuroNGOs 2016 conference took place in Paris from 4 – 5 October. The main aim of this year’s conference was to ensure that the SRHR community is ready to effectively engage in the implementation, follow-up and review of the SDGs, and strategically use them to advance our advocacy on SRHR in a global perspective. On behalf of Share-Net International, Meike Stieglis and Kimberley Meijers attended. Here are some of their most important key takeaways.

Make the SDGs our shared goals so we can have a global conversation on how to achieve them.

Although within the SRHR community the SDG framework and agenda are widely known and acknowledged, this is not enough! We need to push to make them understandable for society by making the SDG more fun and engaging. Civil society should start using creative and smart advocacy. For instance, go to a school in the place you work or live and tell the children about de SDGs. Creating awareness in civil society starts with us!

Traditionally European countries as a whole used to be seen as progressive. This is beginning to shift. The anti-choice opposition is growing and is not a single issue movement. They target different issues like LGBT rights, gender mainstreaming, same-sex unions, surrogacy adoption and comprehensive sexuality education.

The anti-choice opposition started using different language with a positive message. We need to have our own positive message and appeal to feelings, emotions and values, including love and happiness. Petra Schutter, Senator and member of Parliament at the Council of Europe, pointed out that the opposition has become much smarter. “In many occasions the anti-choice opposition started using different language. They are talking more about dignity instead of human rights. We should be very vigilant that acquired freedoms are granted forever. In times of flux and crisis and hardening, these rights might be threatened the first of all.”

We need to involve youth in our advocacy efforts. Kelvin Mokaya, Youth Advocate, Dance4life: “We need to focus on the realities of young people and political commitment is needed. Civil society and other stakeholders are more engaged in working on their own themes than linking up with other NGOs and other NGOs to create stronger partnerships.”

Maria Jose Alcala, former Director of the Secretariat, The High Level Task Force (HLTF) for the International Conference on Population and Development (ICPD): ”We need a multi-faced strategy. We need to focus on the regional level but the country level is in the end what matters most. Accountability for adolescents is important.”

We need to sell our ideas to the people we have never approached before. We need to strengthen our mobilization of individual citizens to convince our politicians and build the necessary capacity.

Reach out to the parallel universe of the non-converted and find common grounds by using the 2030 agenda as tool.

The EU is lacking behind in incorporating the SDGs in their work. The MDGs were a development issue, SDGs are different because the EU is also part of the game. Local governments often do not know how to integrate SRHR issues across the SDG agenda. We, as civil society, need to hold them accountable and create partnerships with them.

Arthur Erken, UNFPA, is sharing his concern that we are not reaching out enough to the parallel universe of non-converted. However, it influences d
irectly our agenda. Therefore, the UNFPA started to talk to ‘others’.  UNFPA staff is encouraged to engage with politicians in Europe who are not ‘with us’. “It is important to reach out to the ones who are not converted. Vital elections coming up, in Germany, in The Netherlands. We need to also reach out to other European countries where there is more conservatism. We have to find common grounds. The 2030 agenda can be used as a tool for that”.

Jean-Louis Ville, Acting Director Human Development and Migration, Directorate General for International Cooperation and Development, European Commission: “We are talking too much with people who are already convinced. We need to look very hard for language that cangenerate. However, there is a lot of common ground, we should build on that.”

Patricia Da Silva, International Advocacy Advisor, International Planned Parenthood Federation/Western Hemisphere Region: “We need to talk one-to-one to African countries, do not see them as one block. Some are more progressive than others, you can work with them.”

Stuart Halford, Senior Representative, The Sexual Rights Initiative (SRI) to the United Nations in Geneva, mentions that “block politics can make our break decisions”. To prevent this from occurring, “we need to advance an holistic approach”. Therefore, we need to put some issues on the foreground despite of others.

Sivananthi Thanenthiran, Executive Director of Asian-Pacific Resource & Research Centre for Women (ARROW), stresses that “cherry picking is a very threat of national implementation and addressing the SDGs. SDG 3 and 5 are not so popular.”

We have to defend and protect SDG 3 and 5, but we have to build alliances with others to bridge those parallel universes. Our strength as civil society in this process is providing evidence as well as having conversations, also on personal level, one to one.

Besides that, another point of attention, is that a huge gap in data and statistics is existing. For example, only 40% of the indicators in Finland can be tracked. “What does this tell about certain development countries?”  said Thanenthiran.

Maeve Taylor, Director of Advocacy and Communications, Irish Family Planning Association, starts with telling us that Ireland has one of the most strict abortion laws in the world. Abortion is only allowed when a women’s life is in danger. Women can travel to other places to have an abortion. On a positive note, Taylor says that “the conversation has opened up more than ever before.” This after a process were the Human Rights records of Ireland were investigated. “This really showed the harms of Ireland’s abortion laws. Recommendations were made to Ireland by other states. Civil Society has been working to normalize that perspective that legal abortion is part of what we want to achieve. We need to bring laws in compliance with human rights laws – change laws and change the constitution. Our strength as Civil Society in this process is providing evidence. As well as having conversations, also on personal level, one to one.”

Save The Date: Breakfast Session \’Worlds apart- Reproductive health and rights in an age of inequality\’
October 4, 2017

Save The Date: Seminar on access to quality medicines and supplies for SRHR