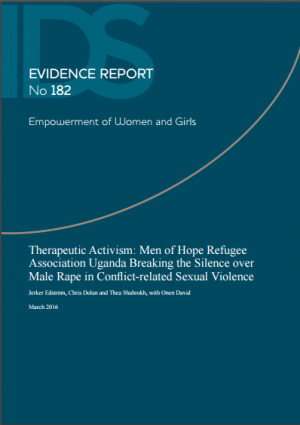 Men’s experiences as victims of sexual and gender-based violence remain little recognised in research, policy or practice. Mainstream narratives generally continue to depict men as perpetrators of violence and women as victims. Yet, having been linked to forced migration in contexts of armed conflict, sexual violence against men is slowly becoming recognised as far more widespread than was previously thought.

Responding to this, the Institute of Development Studies approached the Refugee Law Project and Men of Hope Refugee Association Uganda in order to jointly design and carry out a study on collective action among male survivors of conflict-related sexual violence. This report explores one central question addressed by the study: ‘despite the odds stacked against them, what makes it possible for male survivors of conflict-related sexual violence to organise and become activists, challenging discriminatory social and gender norms?’

The study finds that, despite pervasive discrimination, groups of male survivors have been able to develop resilience and mutual support through collective action. Further, the study finds that third-party service providers and non-governmental organisations can play an important support role in reinforcing the resilience and capacity of male survivors to organise collectively. The report addresses the overarching question through three main sub-questions: